***Note: I want to apologize up front to my blog readers for my delayed post and especially for my delay in commenting on my fellow blogger’s posts.  My adjustments to allow myself to fit back into my life and work has been all consuming since my return. Thank you in advance for your kind understanding.  I will catch up! *** 🙂 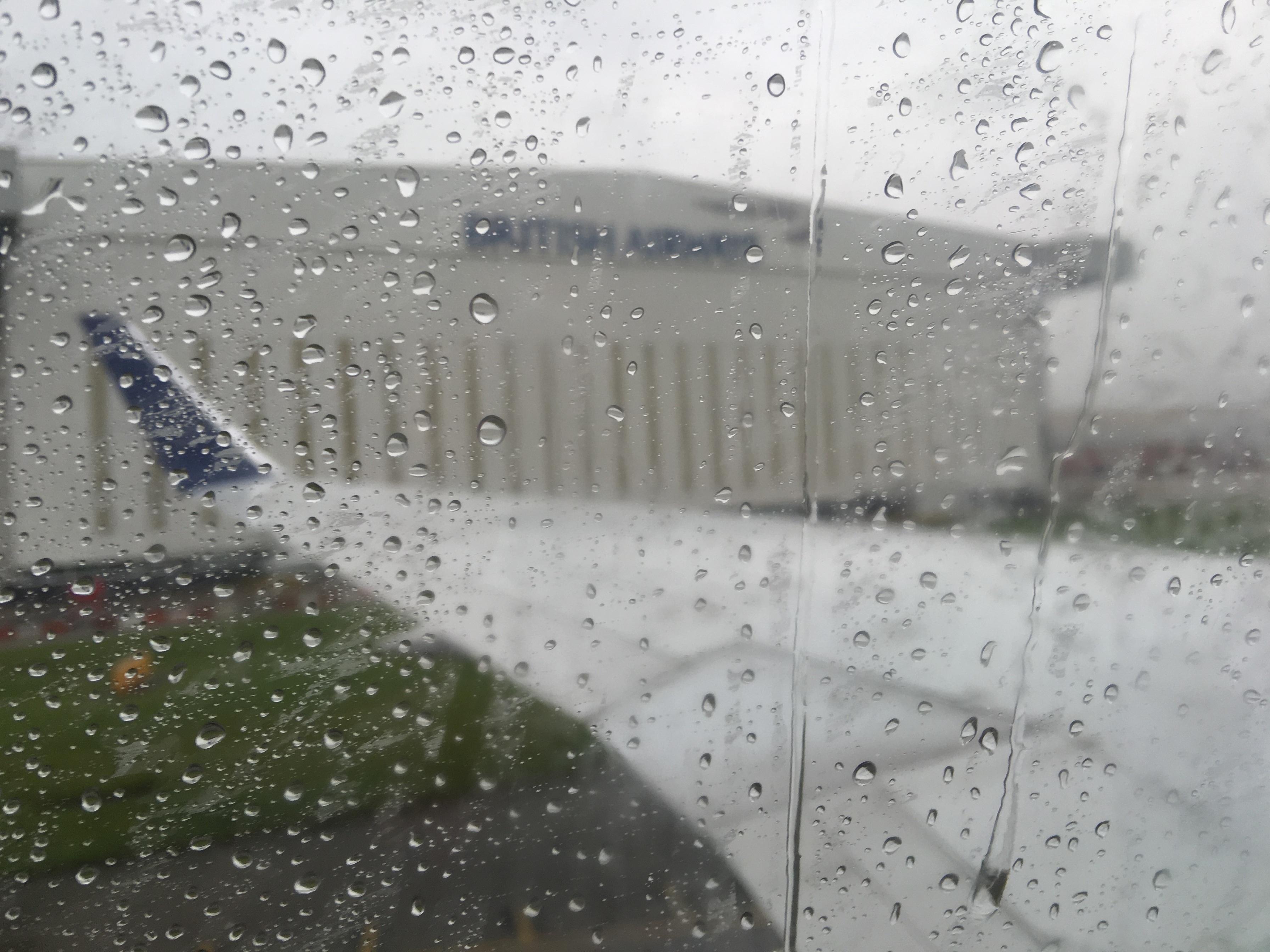 A fuzzy photo taken from the plane’s window when Ann Chandler and I touched down in England on Tuesday, May 10th. Though you see rain drops there, by the time we went through the various airport check points and met up with Tricia, I do not remember any rain that day after leaving the airport. Tricia kindly drove Ann and I to her lovely home and I had a brief visit at that time.

Soon that day, Tricia traveled with me by train, caught at the Walton-on-Thames railway station, to help me connect to the fantastic Virgin Trains. Prior to my arrival, Tricia helped me to reserve my ticket and I happily sat in First Class and in great comfort to observe the beautiful English countryside as I made my way north to meet Janet at Cullercoats & Tyne. ❤

Tricia waving goodbye and I think we both were able to take a photo of one other through the generous window. 🙂

During the entire train ride, I was offered complimentary and numerous hot and cold beverages from trollies and also sandwiches and crisps and fruit. Delightful. 🙂

This was taken at the Durham railway station. I noticed that the people waiting there were taking photos too but of another train approaching in the opposite direction. 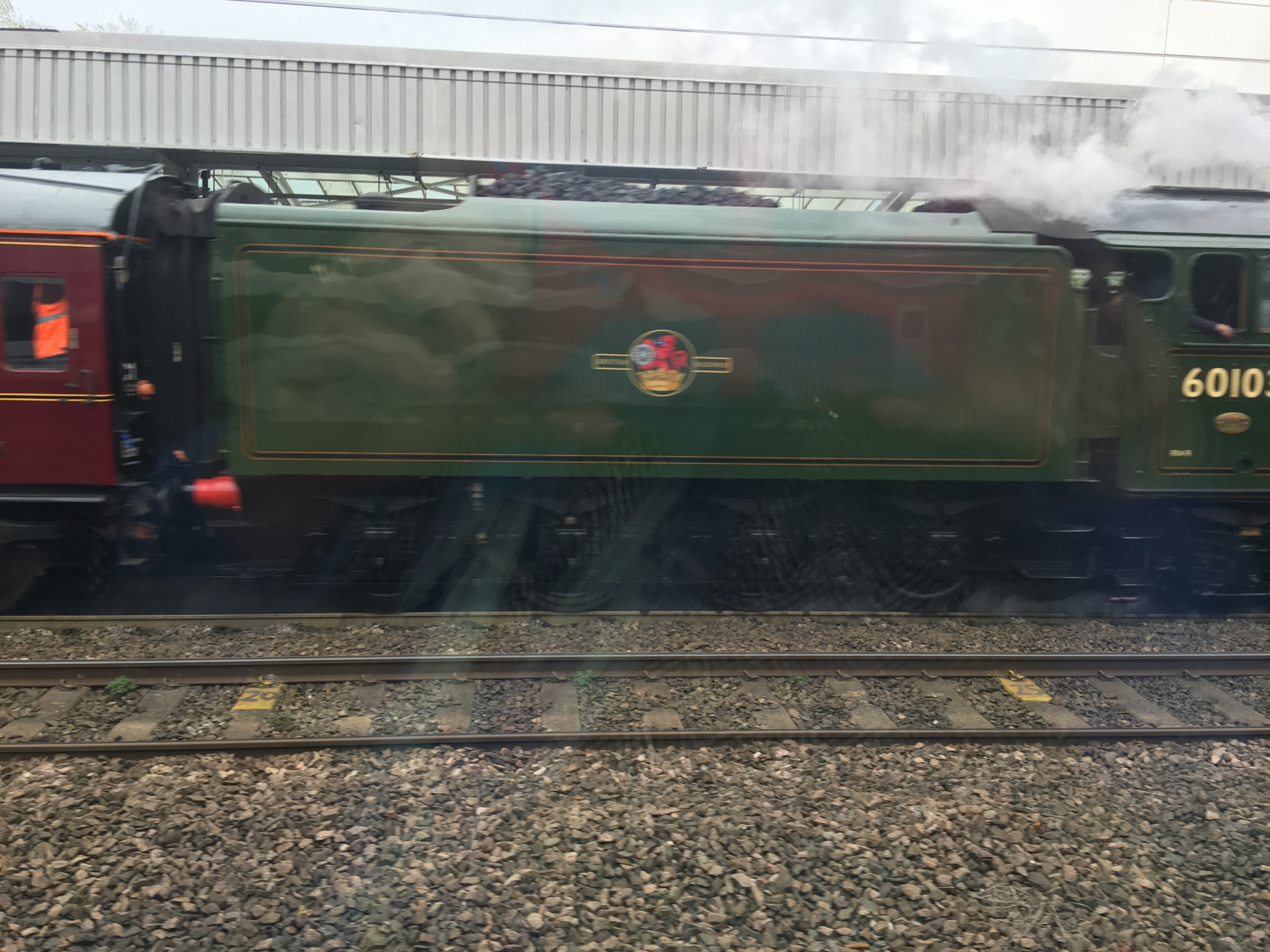 It must have been a very special train and I managed to take a few photos as it passed. 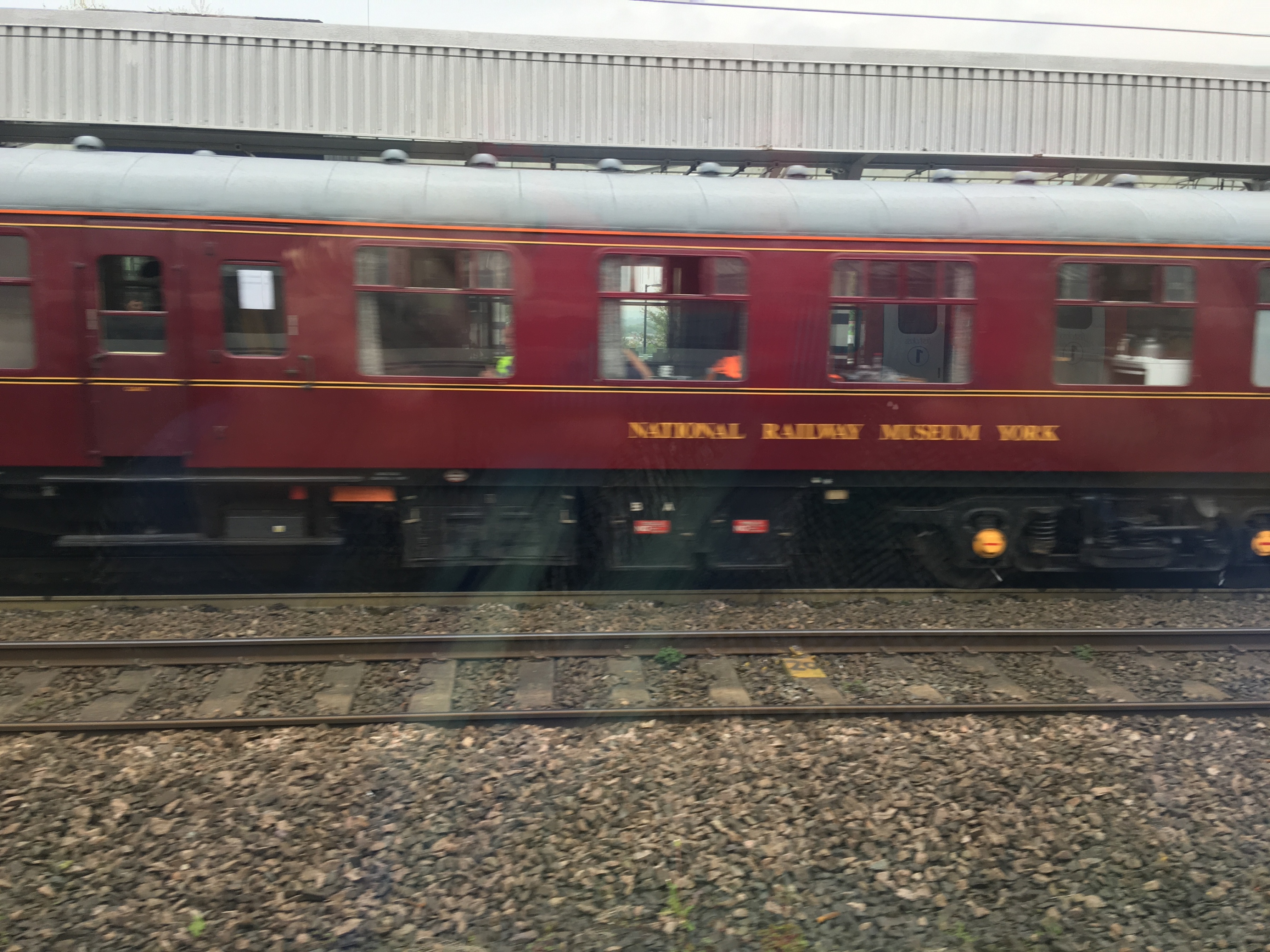 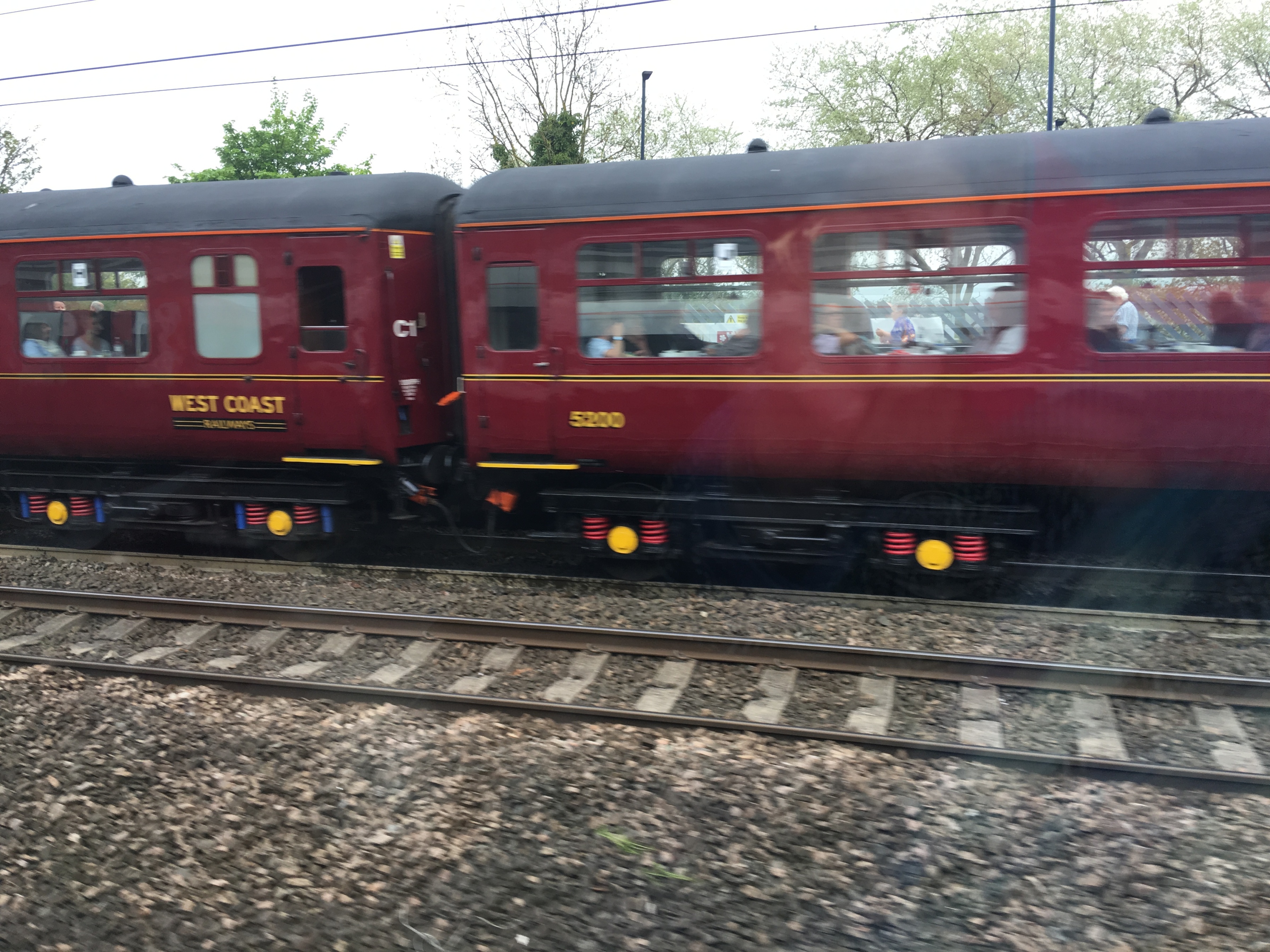 Looks like the people are enjoying their ride too! 🙂 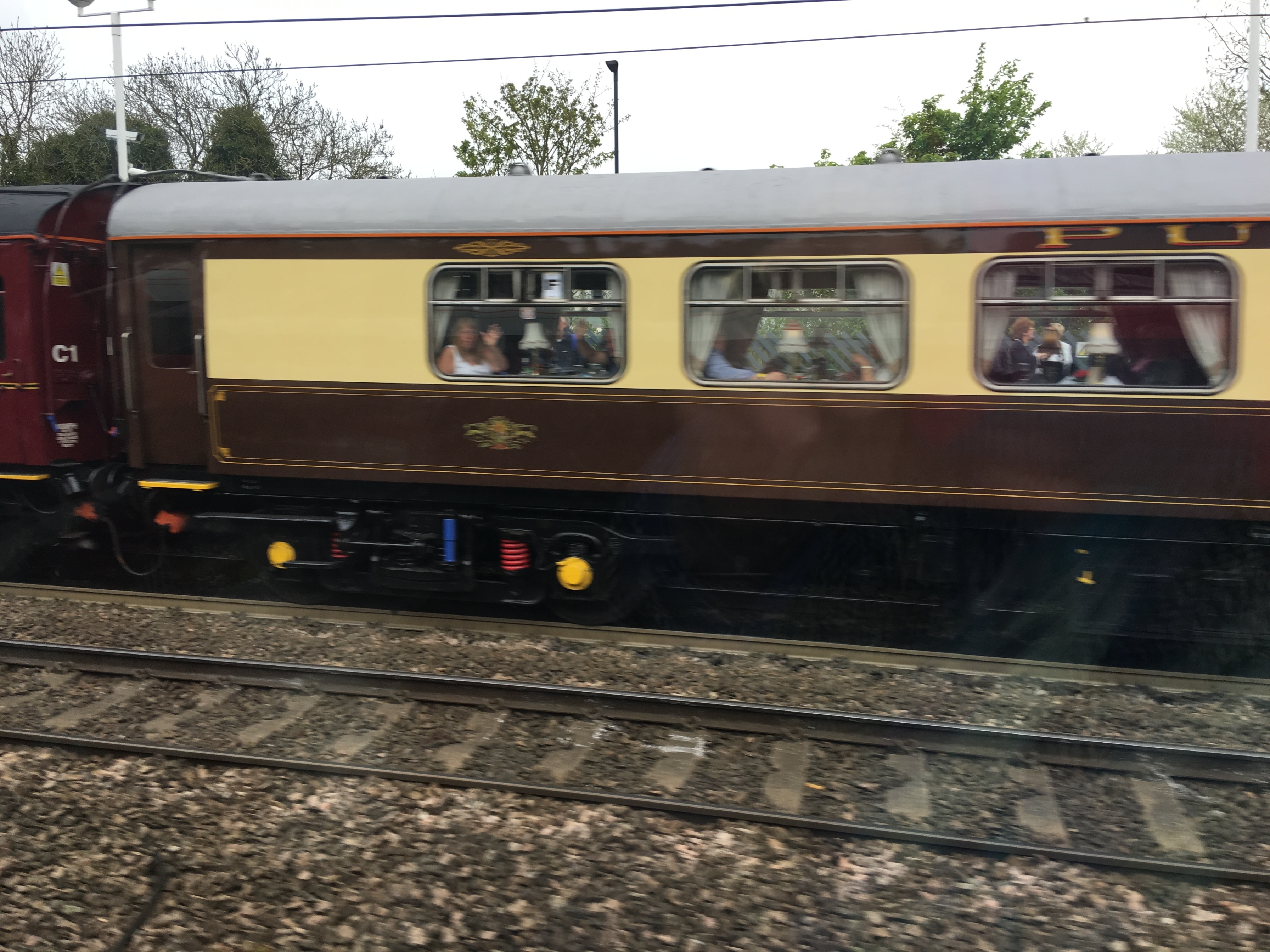 Possibly a dining car. Darling lamps on each table and curtains! 🙂

Another dining car perhaps. I am uncertain what train this was but it was very beautiful and very clean.  I am so happy to have been able to see it. 🙂

After meeting Janet at the station, we walked to her lovely home nearby. Her husband kindly took this photo of us in her garden and I was so thrilled to be standing next to Janet and also thrilled to have our photo taken next to the infamous blue wall that I have seen in many photos for quite a while. I felt like I had reached heaven being able to meet Janet face-to-face after such a long time of sharing and writing about our love for dolls with one another. It was just the very best of times! ❤

I do admit to being a bit tired upon my arrival. It was around 4:00 pm on Tuesday, May 10th. My journey began the day before on Monday, May 9th, when I left my home at 5:30 am and drove 3 hours to Columbus, Ohio in order to fly to Boston where I met Ann.  From Boston we flew to Heathrow airport in London. Needless to say, I slept very well that night in Janet’s comfortable bed. 🙂 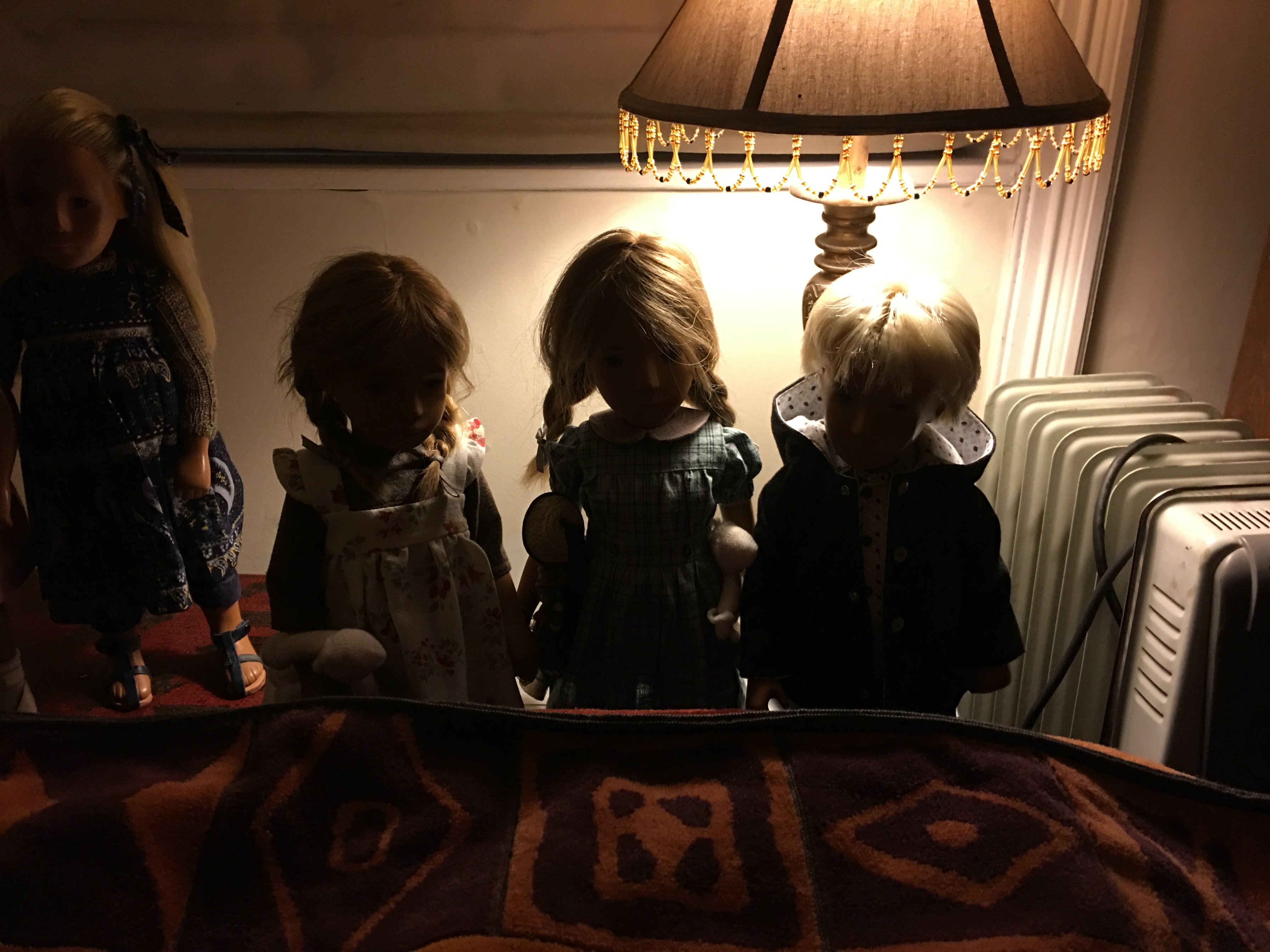 This was the last photo taken that day and it was at bedtime. You can see my Gertie standing next to her twin sister Edith who lives with Janet. Finn is also in the lineup. These dear ones stood next to the end of my bed which was so very nice to see as I drifted off to sleep…..